Finding understanding of the human condition—our species’ capacity for ‘good’ and ‘evil’—is of incalculable importance; in fact, it has been described as the holy grail of the whole human journey of conscious thought and enquiry. And it is this longed-for breakthrough explanation of the human condition that biologist Jeremy Griffith has found.

Listen to Tim describe the importance of Jeremy Griffith’s definitive publication, FREEDOM: The End Of The Human Condition:

“Jeremy Griffith writes from a position outside of the human condition. It is just amazing; Griffith walks freely through all the psychosis of our troubled human condition and with such freedom is able to explain everything about us!” Jeremy Griffith’s work is multi-disciplinary, drawing from the physical sciences, biology, anthropology and primatology as well as philosophy, psychology and psychiatry. Since 1988, he has written a collection of articles and books on the human condition, notably Free: The End Of The Human Condition (published in 1988); Beyond The Human Condition (1991); A Species In Denial (2003), which was a bestseller in Australia and New Zealand; The Book of Real Answers to Everything! (2011), and FREEDOM: The End of the Human Condition and its short companion booklet, Transform Your Life and Save the World (both 2016). In 2017, Jeremy commenced work on the Freedom Essay Series, an ongoing collection of essays (and videos) that cover all the main subjects in FREEDOM in wonderfully illustrated bite-sized portions. You can read more about Jeremy Griffith, and access all his publications, here.

The explanation of the human condition

Key to Jeremy Griffith’s explanation of the human condition is an understanding of the difference between our instincts and intellect, and the effect that difference has had on our behaviour. He explains that when we humans developed a conscious mind some two million years ago, a battle unavoidably developed between it and our already established instincts. Natural selection of genes gives species’ instinctive orientations, such as to a migratory flight path for birds, but a nerve-based conscious mind needs understanding to operate, so when a fully conscious mind emerges and begins experimenting in understanding it unavoidably comes into conflict with the already established instinctive orientations that are in effect intolerant of these deviating experiments in self-management.

The result of this conflict between our instinct and intellect was an undeserved sense of guilt and insecurity that caused us to become psychologically defensive, angry, alienated and egocentric, the upset state we refer to as the human condition—a state we sought to alleviate through a competitive, selfish and aggressive bid for the reinforcement we could gain from winning power, fame, fortune and glory. But now that we can explain and understand this conflict and the guilt it produced, all those insecure, defensive behaviours are obsoleted, brought to an end, and we free ourselves from the human condition.

In short, this explanation represents the fulfilment of the human race’s great hope, faith and trust that one day this psychologically redeeming and transforming understanding of our ‘good and evil’-stricken human condition would be found.

The following video, which appears as Video/Freedom Essay 3 at the top of the World Transformation Movement homepage, provides a short introduction by Jeremy Griffith to his breakthrough explanation of the human condition. Visit the WTM website for further videos and publications by Jeremy Griffith. 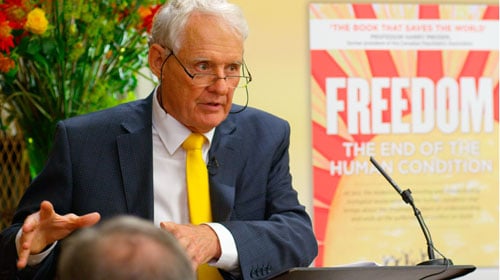 Jeremy Griffith at the Royal Geographical Society, London, in 2016

While the subject of the human condition is by far the most important of all subjects for the human race to address and solve, it is also the most confronting—for some even terrifying—of subjects. This has resulted in some prejudice and misinformation about Tim, Jeremy Griffith and the World Transformation Movement’s work, and where that has occurred it has been strongly countered with rectifying clarification, which you can read about here.

Jeremy’s work has attracted the support of such eminent scientists in the field as Australia’s Templeton Prize-winning biologist Professor Charles Birch and New Zealand’s then foremost zoologist Professor John Morton, as well as other distinguished thinkers such as Sir Laurens van der Post. A proposal to make a documentary about the human condition, The Human Condition Documentary Proposal, which Jeremy wrote the synopses for, also received over 100 endorsements from many of the world’s leading scientists and thinkers, including professors Stephen Hawking and Nobel Laureate Charles H. Townes.

Commendations from scientists for Jeremy’s most recent book FREEDOM: The End Of The Human Condition, which was launched in 2016 at the Royal Geographical Society in London, include:

‘This book by Australian biologist Jeremy Griffith presents the 11th hour breakthrough biological explanation of the human condition needed for the psychological rehabilitation and maturation of the human race!’

‘Nothing Dr. Prosen has said about the immense importance of this book is an exaggeration. This is the book all humans need to read for our collective wellbeing.’

‘The sequence of discussion in FREEDOM is so logical and sensible, providing the necessary breakthrough in the critical issue of needing to understand ourselves.’

Praise and support from eminent scientists and philosophers for Jeremy’s earlier works include:

‘Frankly, I am “blown away” as the saying goes…​The ground breaking significance of this work is tremendous.’

‘It might help bring about a paradigm shift in the self-image of humanity—an outcome that in the past only the great world religions have achieved.’

‘a superb book… [that] brings out the truth of a new and wider frontier for humankind, a forward view of a world of humans no longer in naked competition amongst ourselves.’

‘Could you please send me an extra copy of your book? [Mine] is on loan because it was so appreciated.’

You can read much more praise from scientists and thought leaders for Jeremy Griffith’s treatise here.

The books and other publications Jeremy Griffith has written on his breakthrough biological explanation of the human condition are published by WTM Publishing & Communications.